Multi-national corporations are full of international decision-making teams, e.g., board of directors, executive committee, management groups, project steering committees and task forces. Some of them work and some of them do not, but why? Is it only due to the people? We do not believe so. One executive with extensive international experience says:

"While having great leaders in a decision-making team will help, executives from different countries might still approach decision making in completely different ways".

Companies should adapt a decision-making approach that fits both the corporate culture, as well as the dominant national business cultures of the members in the team.

How Are Decisions Taken and what Information Are They Based On?

It is well-known that global corporations have different corporate decision structures. For example, Coca Cola Corporation is well known for its top-down decision-making approach where a few people at the top decide how to run the company, e.g., performing rapid changes to its global branding strategy or rolling out improvements to production methods. Other companies have a more consensus driven approach, e.g., Philips has received good results and early buy-in using a bottom-up driven decision-making approach. 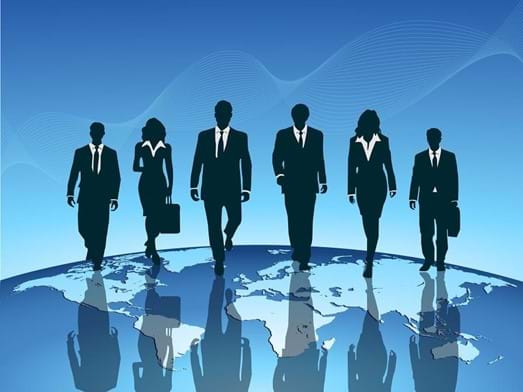 The foundation on which the decisions are taken will also vary in companies. Some prefer to make decisions based on a large number of explicit facts about the questions being discussed and prefer to use those facts in a pre-agreed formal decision process. Those from Anglo-Saxon/Northern European business cultures such as UK, Germany, Scandinavia or USA have a tendency to prefer this approach. Others prefer to make decisions in a more implicit and intuitive manner. Building rapport and establishing strong working relationships between the parties is important. When it is decision time, there is a tendency to have a less formal decision-making process and sometimes decisions are taken outside the formal setting. Those from Latin/Southern European business cultures such as France, Spain, Italy and certain South American countries often lean towards this approach.

Combining these insights, we get four decisions models, see illustration. 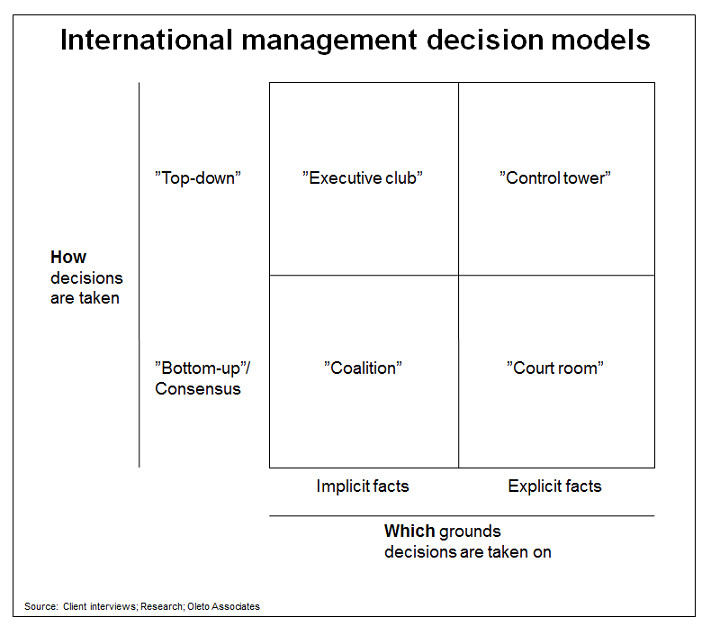 1. “The executive club”: This model works best when the corporate culture is top-down driven and when most of the members already have a good intuitive view on what the solution should be. Examples of situations where this model can be very effective are: Defining a new organisational structure or setting management compensation schemes in a small top management team.

2. “The control tower”: This model works best when the corporate culture is top-down driven and when most of the members in the decision group prefer explicit validated facts. The decision-making process is characterised by quickly gathering an objective decision foundation and then swiftly deciding what to do. Examples of situations where this model can be very effective are: Managing the merger of two companies or overseeing a large restructuring.

3. “The court room”: This model works best when the corporate culture is bottom-up driven and when most of the members in the decision group prefer a highly factual decision basis. Situations where this approach can be impactful are, e.g.: Defining a large operational improvement programme where strong execution buy-in is needed or a preparing for a multi country procurement programme.

4. “The coalition”: This model works best when the corporate culture is bottom-up driven and when most of the members in the decision group have strong subjective views on what the company should do. Examples of situations where this approach can be successful are: Defining a model for sharing sales leads in a multi-local business group or defining a knowledge management practices.

While each of the models can be extremely effective in the right circumstances, they can also be almost destructive when used in the wrong context. For example, a major furniture producer used the “court room” model when designing its new global organisational structure and ended up with an agreed and well-documented matrix organisation which brought the business to a stop due to its complexity.

The point is to be conscious about the organisation’s natural decision model and try to influence that depending on the type of decision to be made. For each type of decision and each management group there is a right model. Using this thinking will make many international management teams more successful in reaching their objectives together.