Can companies proactively plan to soften the impact of a crisis?

The possibility of another global economic decline cannot be denied. Can companies proactively plan to soften the impact of a crisis? Cost flexibility can be a viable strategic option.

Major financial institutions and corporations were forced to file for bankruptcy or were acquired by other firms. Companies in almost all industries were impacted for years to come. After the dust settled, the cost of the financial crisis to the USA economy alone was estimated by the US Treasury Department to be over 19 trillion dollars. Most developed and developing countries around the globe took nearly a decade to recover.

Looking back, we know today that a complex interplay of multiple factors caused the largest financial disaster since the Great Depression. Companies and investors who predicted and/or proactively planned for such a crisis ended up limiting losses or profiting.

A single defining event was not the cause of the recessions of the last decade. Rather, the recessions occurred due to an initial economic event, that were later compounded and reverberated around the globe. Whether there will be another economic decline in the future is not a question of if, but when.

There are several factors that could spiral into the next recession or economic decline, e.g., trade wars, health crisis, natural disasters or political turmoil.  Companies cannot fight the possible macro-economic trends but they can think about the levers to soften or sustain the impact of a crisis. One of these are increasing cost flexibility.

There are several ways that companies can plan to better weather the storm during the next economic decline. In Exhibit 1, some of the key levers are indicated. We posit that a company with low fixed costs and a variable approach to contracts can respond more rapidly to economic downturns, allowing the company to scale down and remain cash positive during the crisis. 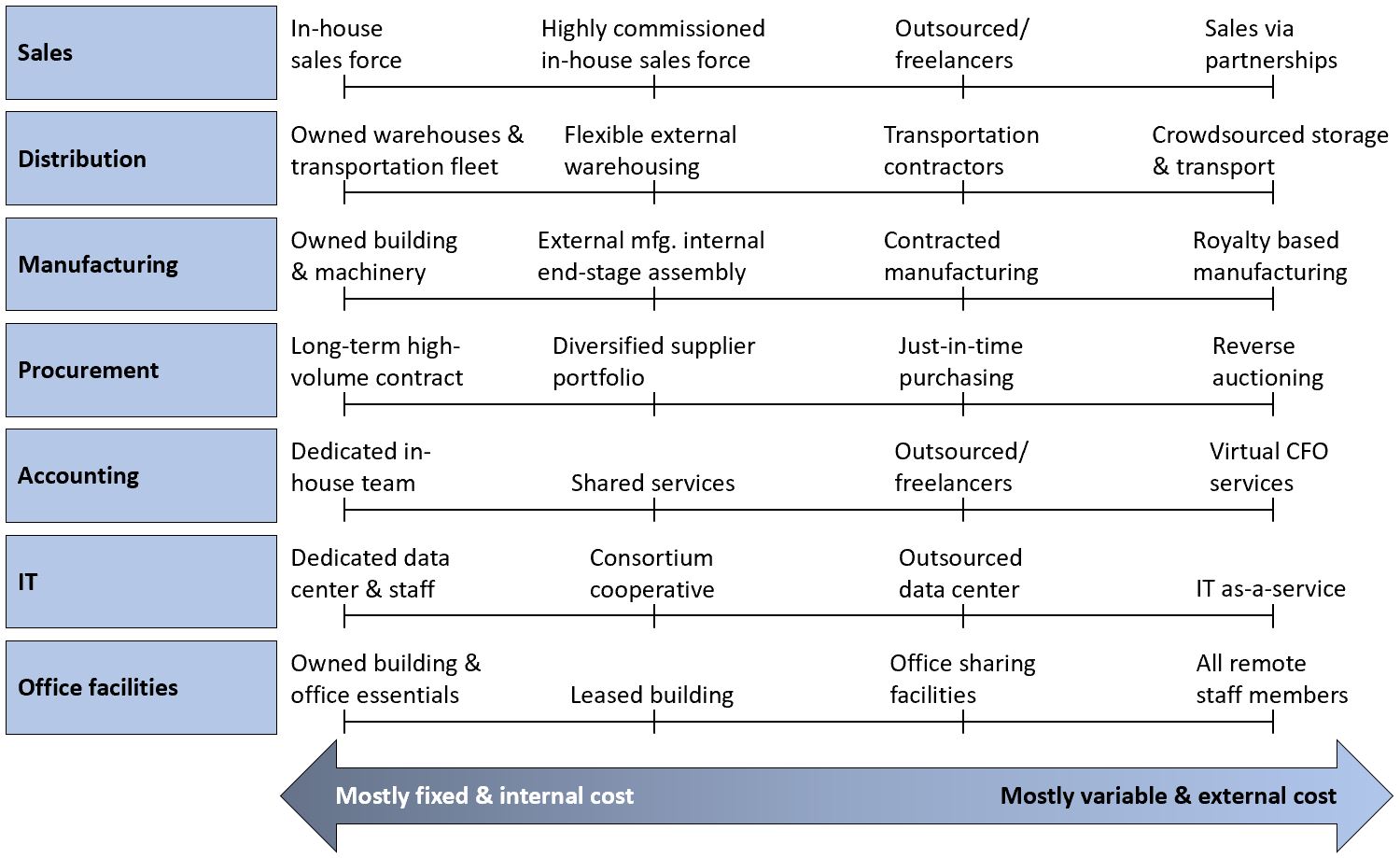 As an organization moves from a more fixed to a more variable cost structure, the exposure to global economic risk for the company can be shifted to external partners (i.e., to suppliers and contractors). Cost flexibility in a company translates to the ability for the firm to scale up and down their production/service delivery within a short period of time.

Of course, there are other tools in the arsenal of a medium to large company to combat an economic crisis, and there are several financial investments available to reduce the risk of adverse price movements of their assets, including currency future contracts, short straddles on equities/indexes, back-to-back hedging, commercial insurances, among others.

When and how to start preparing

Companies should embark on a two-fold approach. Initially, companies should identify areas where they could benefit from cost flexibility in the current economy. Secondly, they should develop a crisis plan for what to do in the event of a sudden economic decline.

No strategy is without its inherent risks. Some companies may choose to move all their business processes from a mainly fixed and internal to a mainly variable and external, while others may wish to simply move one lever, e.g., sales. Prior to undertaking transformations companies should ensure they develop a tailor-made approach and establish the sufficient execution capabilities.