An executive view on historic and future computing and provider models

Innovations in computing and provider models have over decades taken executives for a ride. Each innovation has offered new unique and valuable business opportunities. However, waves build up over time. When not managed carefully, businesses risk value destruction from hiding timidly behind the coastal rocks or having to deal with all the waves simultaneously.

In this article we will take an executive step back and look at what is going on in the “bread and butter” of computing, i.e., the provisioning of processing power and storage capacity. We will introduce Oleto's new top management model for how to think about computing and provider models, called the CaPEx framework (Computing and Provider models - Executive perspective). We will outline the key challenges businesses face and how to think about maximizing value creation. Our story is focused on the “infrastructural layer” of digital value creation and the delivery models around this. We keep in mind that the true benefits naturally come from running people centric, smart and business critical applications on top of the infrastructure. This is a topic to be covered in other articles.

Computing innovations over the last decades are characterized by the introduction of new computing models and as well as new provider models. This means that we have seen significant changes to HOW processing and storage is performed but also WHO provides these to the customers, often both at the same time. See Exhibit 1, with explanation in Exhibit 2-3. 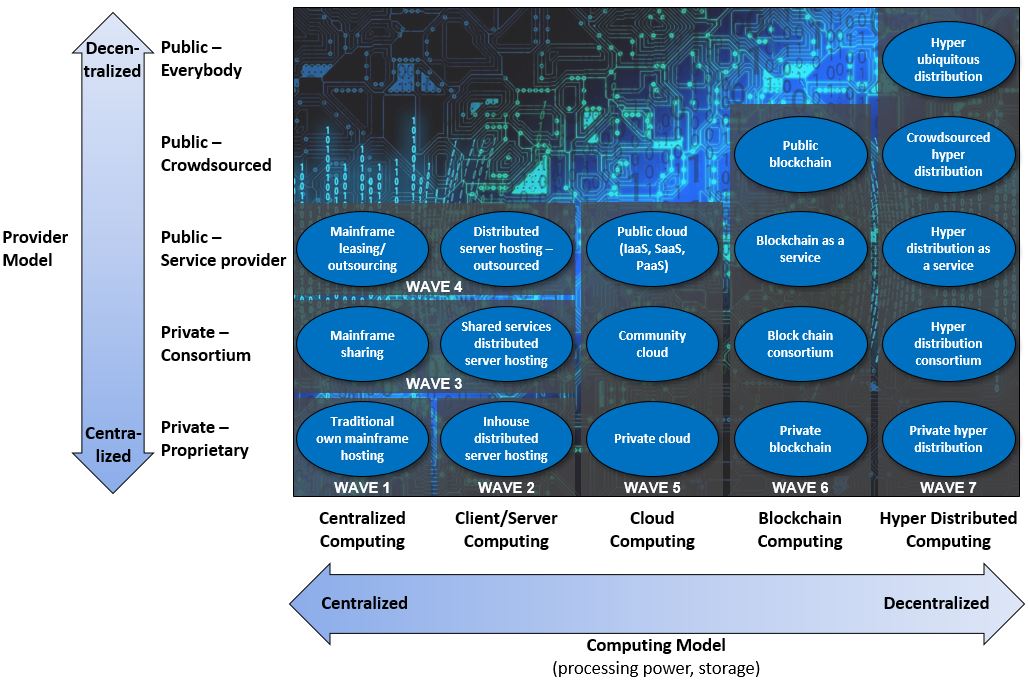 The framework represents 7 decades of innovations with a clear accelerating tendency over the last decades. Although the early waves are well-known, Oleto has found that many business executives struggle to understand the historic and future evolution and put it into a strategic context. Please see a brief walk-through of each wave below.

Wave 1 (1960s): Mainframe
Mainframes, the first commercialized computing model, are based on architecture where centralized computers are controlling all processing and data. Centralized computing experienced its growth in the beginning of the 1960s. With this platform the focus is on throughput and reliability, allowing mainframes to process a substantial number of transactions with little to no downtime and high system stability. Examples of mainframe computing can still be found today in large banks, retail corporations, and governments to conduct bulk data processing for critical applications government administered census statistics.

Wave 2 (1970s): Distributed
The next wave of computer model innovation came in the form of mid-range, commodity servers, and desktop computers, set up in a distributed architecture, also known as the client server architecture. The peak growth period for this innovation in computing was in the 1970s. Distributed computing is still being extensively used and is ideal for solving large complex tasks that often have very similar sub-tasks that can be processed independently, with the results combined upon completion. It also splits the workload differently between server and client entities than centralized computing.

Wave 3 (1980s): Shared services
Shared services, an early provider model innovation, is the practice of consolidating business operations used in multiple areas of the business, with the practice undergoing substantial growth in the 1980s. Shared services possesses two core benefits: the ‘less of a common resource’, which argues that fewer managers, systems, and facilities leads to lower costs, and the ‘efficiency through industrialization’ arguments, which states that optimization occurs when shared services is specialized and standardized. The shared services model is still in used amongst IT cooperatives in, e.g., financial services and government.

Wave 4 (1990s): Outsourcing
The IT outsourcing wave that took off in the 1990s was another example of a provider model innovation. It builds on employing information technology resources outside of one’s organization. The benefits of outsourcing IT capabilities have come primarily from cost reduction and an increase in efficiency and competitiveness. The practice of outsourcing IT functions has allowed companies to be more responsive to the changing technology landscape. The outsourcing wave continues to play a key role while some companies are reversing and in-sourcing mission critical components.

Wave 5 (2000s): Cloud
The on-demand delivery of IT resources via the internet, with pay as you go pricing, allowing companies to access technology services on an as needed basis led to the cloud's commercialization in the 2000s. The core benefits associated with cloud computing is in the adaptability of the platform to provide scalability and flexibility to its clients. The public cloud model is the most prevalent cloud model and was developed by global tech players providing scalable resources to on-demand to clients. Another form of cloud computing is the private cloud, which is an internal network using the same cloud technologies as the public model but only open to select users, allowing the provider additional control and customization. Additional forms of cloud computing include community cloud, which is a collective organizational effort to share infrastructure between several entities with common interests/concerns. Multi/hybrid cloud model are emerging concepts to management wave 1-5 altogether.

Wave 6 (2010s): Blockchain
Blockchain is characterized as a decentralized and distributed system of computing that involves the storing of identical transactions across multiple nodes, ensuring that retroactive data alterations cannot occur. The commercialization of the blockchain began with the introduction of the cryptocurrency, and has experienced growth in the 2010s, in various forms and shapes. The core benefits of blockchain rests in the ability of the platform to ensure data security and a permanent immutable audit trail. Private and consortium based blockchains require each user to be vetted by the provider, meaning that the platform does not rely on the same level of confidentiality. Blockchain as a service allows organizations to implement cloud-based solutions to build, host and use their own blockchain applications, while public blockchains, known by blockchain purists as the only true form of blockchain, is a permissionless network of nodes which is anonymous and resistant to modification of data. Block chains represent innovations in both computing and provider models. 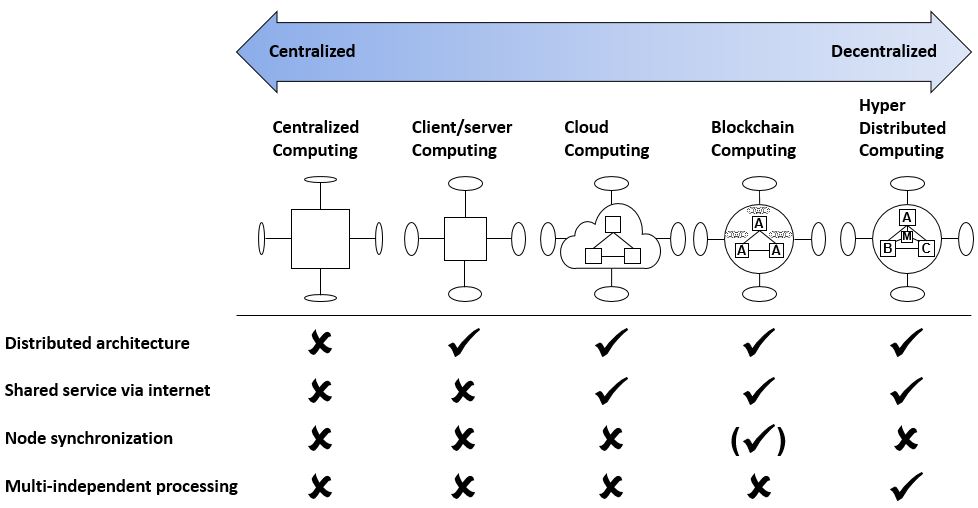 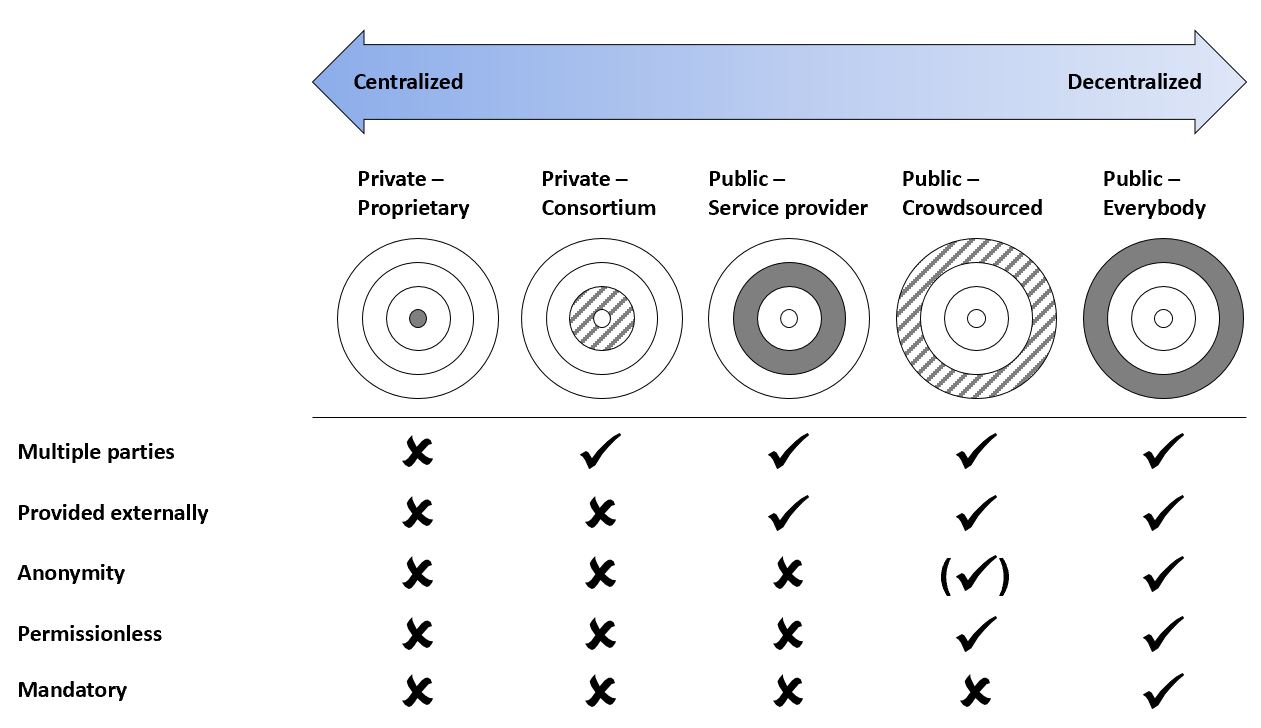 Each new model provided its own mix of benefits, e.g., scalability, cost efficiency, flexibility, security, data regulation compliance, high volume performance, stability, immutability, manageability, anonymity. However, the pace of the evolution and the very different nature of each wave has imposed several key challenges for businesses:

What Businesses Should Do

Businesses should embark on a five-step process to increase value creation through the use of a better fit and a future proof infrastructure:

Step 1. Identify the infrastructure needs of the entire digital value chain: Break down the business model into its key parts and identify the processing and storage needs of the business applications along the entire chain. This sets the context for a business-driven choice of computing and provider model, e.g., scalability, cost, data separation, immutability.

Step 2. Understand what the current and the future computing models can offer: Deeply comprehend what each model in the market today brings to the table and the core beliefs around the future evolution. This is not only an IT driven effort but will evolve executive awareness setting so the company can decide on the strategy in the subsequent steps.

Step 3. Assess the strategic fit: Evaluate the current application landscape and existing plans against the value chain and what each model can offer. Find out where there is a good fit and where key gaps are over time. The key gaps are candidates for moving to different platforms.

Step 4. Develop the transformation roadmap: Define the roadmap which transforms the application landscape to the desired infrastructure platforms. Clearly this should be done in alignment with application functionality roadmaps and sourcing strategies. It needs to be combined in a full cost/benefit case.